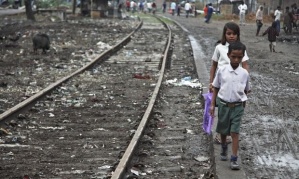 Two days ago, two teenage girls were gang raped and then murdered outside a village in Uttar Pradesh in India. The girls were looking for a place to defecate.

According to a report by WaterAid, 2.5 billion people live without access to a domestic toilet. This forces women and girls to walk to isolated spots, often early in the morning, in order to relieve themselves. This is precisely what these two girls were doing when they were waylaid and attacked.

The Times of India quoted the police in another district of Uttar Pradesh as saying that 95% of cases of molestation and rape occur while women are seeking sites to defecate.

One in three people around the world lack access to basic sanitation.

As WaterAid puts it:

Being forced to defecate by rivers, in fields or in alleyways not only puts women and girls at greater risk of sexual violence and harassment; it is also a major public health risk. The practice pollutes natural waterways and spreads diseases, notably diarrhoea, a major cause of death in children in the developing world. Every day, around 1,400 mothers will lose a child to this disease, brought about because of a lack of access to basic sanitation, clean water and hygiene services. Research estimates that just putting an end to open defecation worldwide would see this figure drop by over a third.

WaterAid and other charities are calling for new Sustainable Development goals to address this global crisis. It’s worth remembering, however, that lack of access to basic sanitation and the sexual violence that it helps perpetrate are a product of increasing global inequality. Global institutions of governance such as the World Bank have been exacerbating rather than ameliorating these conditions.