Austerity doesn’t work, according to an article in today’s New York Times. The article focuses on the fact that the middle class in the US is falling behind its peers in other developed countries.

What is particularly interesting about the article is buried in the graph reproduced here. The nations – like the US, Britain, and Greece – where harsh austerity measures were introduced following the financial crash of 2008 all demonstrate a sharp downturn in the economic status of their middle classes, while those that did not implement such measures have continuously rising curves of middle class affluence.

The central assumptions behind the article are that growth is essential to maintaining middle class status. Seen from an environmental angle, the economic downturn has actually been a beneficial phenomenon since it has put the brakes on the developed world’s headlong expansion. But this is not much of a salve to the situation of struggling people in places like the US. And elites have continued to expand their grossly large incomes by investing in developing countries, meaning that carbon emissions have continued their inexorable, suicidal rise.

We clearly need an alternative economic system, one that benefits average people while not wrecking the planet’s ecosystems.

Life and debt, and suicide 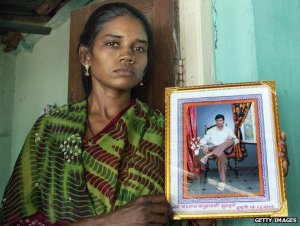 In the grad seminar I’m currently teaching on postcolonial ecologies, we did one unit on the struggles rural people in India have faced over the last two decades, roughly since the beginning of neoliberalism in the country. Among the many problems faced by farmers, debt figures prominently. All too often, crippling debt leads farmers to take their own lives. Thousands of Indian farmers have done so over the last two decades.

As the work of Mahasweta Devi makes clear (we read Imaginary Maps), this problem of farmer debt also has a gendered dimension. Debt leads families to sell their children to unscrupulous loan sharks, who often force young girls into prostitution. Even in less dire cases, however, the problem of debt, gender, and farm labor is an onerous one. In the photo to the left, for example, we see a widow posing with a photograph of her dead husband. The assumption is that he was the farmer and that she was the farmer’s wife. Yet in many cases it is women who are the farmers, and it is often women who are committing suicide.

A recent documentary by Deepa Bhatia brings out some of these dimensions while giving a chilling overview of the silenced crisis of the countryside in India. The film is called Nero’s Guests.

How climate pain is being spun into corporate gain