Winnie Overbeck, Coordinator of the World Rainforest Movement, begins this presentation on Fake Forests. He was introduced by Wally Menne of Timberwatch. Winnie, he told us, is going to explain why we oppose industrial tree monocultures.

My organization was founded 25 years ago by a group of organizations concerned about policies for “forest preservation” established by World Bank. In the 1980s, the WB sponsored reforestation plans using eucalyptus trees on community lands. Communities began complaining that these plantations were causing many problems for them. Since then, we’ve been researching these issues with the aim of helping communities and forest-dependent people to secure their livelihoods against different threats, including plantations, mining, roads, and industrial agriculture.

In 1999, we launch a permanent campaign against tree plantations. Communities around the world are losing their livelihoods to industrial plantations such as pulp and rubber companies in various parts of Latin America, southeast Asia, and Africa. And there’s a new trend during the last few years: oil-palm plantations that supposedly save the climate by storing CO2 in the trees, which are then cut down to be used as biofuel.

Industrial tree monoculture plantations have been promoted by the FAO (international organization for agriculture), and by governments, as forests. Eucalyptus trees in Thailand are called “the selfish tree,” because it sucks up all the local water. In Chile, such trees are called “planted soldiers” because fascist dictatorship gave indigenous peoples’ lands to developers. In Brazil, they

call such plantations “the green desert,” because there is no life inside them. In South Africa, people call them “green cancer,” because they’re invasive and destructive of the soil. They’re a dead forest that kills everything.

Another reason to do these campaigns is because plantations are symbolic of the destructive and unjust character of the present capitalist development model being imposed on people around the world. These plantations are based on continuous development, maximum profits, and are an integral part of the “false solutions” for the climate crisis.

Figures on paper consumption. Globally, we use 54 kg/person/year. But in Finland, each person uses 324 kg/year, while in Brazil the average person uses 35 kg, in Vietnam 15 kg/year, and in Cameroon people use only 3 kg/year. But Finland and Vietnam are equally literate, so it’s not a result of inequalities in education.

Paper consumption increased 5x in the past 50 years. In the USA, 50% of the population never read a book again after leaving school. Half of the paper consumption in the world is for wrapping paper, so it’s linked to the global unsustainable commodity chains. Only 15% of paper products are actually bought by people in that form. 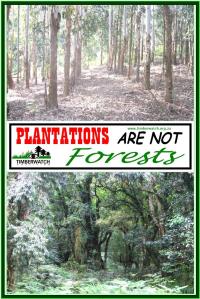 How to support this campaign? We support local struggles through information spreading, exchange, case studies on specific impacts; we engage in a permanent campaign with the FAO to change their official forest definition; we struggle against greenwash mechanisms such as FSC, Corporate Social “Responsibility”, ‘new generation’ plantations) and false solutions to the climate crisis using plantations.

September 21st is International Day of Struggle against Industrial Tree Monocultures.  It was created in Brazil in 2004 by communities struggling against plantation companies.

Next up, Carlo Joavin from La Via Campesina is going to talk about the impact of industrial timber monocultures on peasant communities in Mozambique. I’ve come to experience my experience about monocultures in Mozambique. I’d like to take this opportunity to talk about a company which is going to open production in Mozambique, but which didn’t fulfill promises it’d made to members of communities. This will make problems because people will no longer be able to harvest forest resources. As an organization we’re trying to negotiate with the government to prevent opening of this facility.

Then Simone Lovera of the Global Forest Coalition talked about false definitions. The definition of forests has had a large impact on the model of forestry developed in Europe and then exported to the rest of the world through development policies that promote top-down approaches that impose capitalist, corporate-driven, neoliberal approaches on local communities in the name of “aid” and “capacity building.” I’m from a part of the Netherlands that is filled with tree plantations, which are called “forests.” In many other parts of Europe, the practice is to clear-cut trees and then plant monocultural plantations.

In the case of the plantation near my house, the practice of clear cutting began in the 1850s. Clear cutting was not just related to farming, but also to a massive military industry that built ships, including ones used to bring slaves to the New World, and mining, which needed lots of wood. In Europe, tree plantations were planted on territory occupied by marginalized peoples, who had often been pushed off rich lands by large landowners and left in degraded, sandy areas. These people used the “marginal” lands in a whole variety of ways for sustenance. Once the plantations began moving in, people were cleared off because they often didn’t have land titles. The rest of these people were pushed off simply because tree plantations destroy work: once planted, there is nothing more to do. As people left, shops and schools closed down until entire communities had disappeared.

Since the 1970s, there has been increasing awareness of the need for biodiversity in forests, with the result that many plantations are regenerating into biodiverse forests. But this process is extremely difficult because the main plantations in Europe are pine plantations, which very other species can live amongst. So to restore trees, the pines have to be cut down.

The FAO and climate negotiators from the North do not want to distinguish between real forests and fake forests (aka plantations). We keep getting the argument from Northern foresters that you cannot distinguish between plantations and forests. These are all Northern-driven processes. The definition adopted by Parties to the Kyoto Protocol for LULUCF is based on how many trees you have per hectare and how high they can get. This explicitly includes plantations and part of land that have been clear-cut. According to this treaty, it’s not clear if an oil-palm plantation is a forest or not. LULUCF allows European governments not to cut their carbon emissions but just to grow tree plantations and thereby solve climate change.

This battle caries forward in UNFCCC and also on national level. Everyone needs to pitch in to latter. We already have a clear definition of forest. We have to resist moneys being disbursed to countries to develop fake forests. La vida no se vende!

Tom Goldtooth spoke next on the impact of monocultural tree plantations on people’s cultures. As indigenous peoples, in 1990 we were facing an onslaught of government-driven initiatives that led to toxic waste coming out of the ground. But before this, extractive industries were allowed onto our lands. One of our biggest issues has been deforestation in both the U.S. and Canada. There are often no protection mechanisms strong enough to stop logging and mining. We’re experiencing this issue in Alberta, where the boreal forests are being clearcut for Tar Sands production.

Clear cutting has been the policy of the US government for 100 years. But we need to look even further back to the arrival of the Puritans in the 1600s. Our analysis was that the voyage of Columbus and subsequent colonial ventures were part of a business scheme to extract lumber.

How did this affect us as an indigenous people? Gradually colonists moved West, pursuing a policy of clear cutting until they hit the prairie lands. The settlers needed timber for houses, railroads, etc. The result was devastation of trees. In the region of northern Minnesota where I live, the rivers and lakes were flooded with cut timber, which choked off fish populations and left our people with no food since we were dependent on the natural food system.

We had huge biodiversity in this period: birch, aspens, spruce, pine, cedar, etc. The latter were used for ceremonial purposes, but they and others were wiped out to build homes and other forms of culture for settlers. When the forests were clear cut, the soil and water temperature went up, causing more deaths of fish. The chemicals that come out of pulp mills are also a health risk to my people.

As Native people, we have a relationship to the environment. Many of my people have totemic relationships through clans to animals in the area like bears, eagles, martins, otters. Clear cutting pushes bear families back into areas that haven’t been clear cut, leading to decimation of bear populations in my area, leading to garbage bears. Tribes connected to the birds have seen that plantations are greatly diminishing bird populations.

All of this adds up to increasing difficulty in maintaining our cultures. We face a long history of attempts to destroy our culture. The shift from clear-cut to select-cut is only beginning now.

As the trees disappear, we say that there are no more elders, no more old growth trees. Link between this change and depression and suicide among Native American peoples.

During the panel, the organizers also distributed a copy of an editorial published in The Guardian by Kenyan Nobel laureate Wangari Maathai shortly before her death. In this editorial, Maathai argued that the terrible drought of 2011 in East Africa is related to the loss of intact forests, which help to stabilize local climates and secure the livelihoods of Africa’s farmers, herders, and entrepreneurs. Maathai explicitly challenged the REDD+ initiative to plant exotic trees at the expense of indigenous forests.